2021 has been a year of many challenges as experienced in 2020 when the Covid-19 pandemic disrupted every fabric of our existence and day-to-day lives. As Squash South Africa, through the able leadership of the executive committee, supported by the ever-supportive squash community, we found ourselves confronting these challenges and seeing them as opportunities for the greater good of the sport. As demonstrated by the successful developments of 2020, we retained the successful model of utilizing our regions as hubs which afforded us the opportunity to encourage safe squash tournaments as well as the expansion of already existing tournaments. Squash South Africa is very aware that the health and safety of our players is of prime importance and with that in mind all the national tournaments shall carry on operating in hubs and regions. The Growthpoint SA Open shall resume in 2022 as most international athletes are unable to travel to South Africa owing to travel restrictions. This in turn affords national and regional tournaments the opportunity to expand and strengthen their competition structures.

For the first time ever, Squash SA will be including a U17 Growthpoint SA Nationals in hubs with the finals taking place with the Seniors at the V&A Waterfront, in Cape Town.

The Growthpoint SA Nationals shall be the curtain-raiser for the South Africa v Wales Test which will feature both the men and women divisions as well as both singles and doubles. The International Test shall also be a qualifier for the 2022 Commonwealth Games. The 1st test shall be set in Cape Town (26-28 October), then St Francis (30 Oct-02 Nov) and Johannesburg (5-7 November) – pending final confirmation.

The Iron Man PSA closed Circuit event shall take place in Parkview Johannesburg from 2-5 September. Whilst the Growthpoint Interprovincials (IPT) shall also take place in hubs between the 13th to the 17th of September.

I would like to thank all our members for their unwavering support throughout this difficult and testing period, together we will overcome. As I conclude, I would also like to thank all our partners and supporters, big and small, with notable mention to Growthpoint Properties, Tsogo Sun Hotels, Dunlop South Africa, and the City of Cape Town for showing belief in us.
See you all soon.

Test squash is back and there are 3 series lined up in the coming months. Squash South Africa is due to take part in the Men’s World Championship in December in Malaysia. Eight players have been chosen to make up a South African squad and the squad consists of a fair balance between youth and experience.

The following individuals were selected:

These eight players shall also form part of the core team that is set to play the Test series against Wales in October. Commenting on the team selection, national Convenor of selectors, Craig van der Wath said “it’s an exciting time for Squash in South Africa as we promote opportunities for our best talent to compete against other countries on the world stage and at home.

Our selection policy is based on merit as well as providing opportunities for some of our up-and-coming players to prepare them for the future. Our squad consists of proven stars who have done it all, along with fresh and exciting talent coming through our talent structures”.

The Men’s World Championships carry a lot of weight in determining the national rankings and South Africa, currently ranked 18, is hoping to make an impact to improve on that ranking. The Test series against Wales will afford the team the opportunity to prove its worth as it also serves as a qualifier for the 2022 Commonwealth Games, and it will not be taken lightly.

Meanwhile, the ladies’ national squad will soon be announced for the Wales Test as the Women’s World Championship takes place next year – 2022. 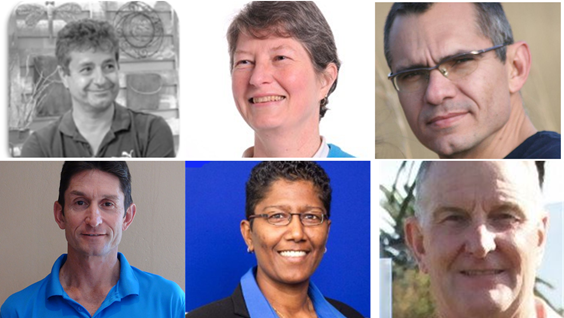 The 2021 Squash South Africa Annual General Elections took place on the 26th of June virtually where a new executive committee was elected.

Kyle is the new President-elect of Squash South Africa having served on the board for several years. In 2020 he served on the executive committee as the Treasurer. His Presidential tenure is not the first time he has held a similar post as he currently holds office as the President of the Northern Squash Association.

Alison Burchell is a long-time squash administrator starting with the unity process in the Western Province in 1991. She was elected to the first united Western Province Squash committee in 1992 and then to the Squash SA executive in 1997. She has served as Vice-President and President and is a strong proponent of equity, diversity, and inclusion as well as good governance. Alison currently serves on the World Squash Federation’s Ethics Commission.

Blaar is the current Chairman of the Northern Squash Association. His new appointment as the new treasurer is nothing new to the long list of committees he has sat on for a number of years. In 2020 Blaar was part of the Squash South Africa executive committee as a board member. Blaar is very passionate about the sport and his presence in the committee brings a wealth of experience.

Craig started his squash career at Selbourne High School in East London. He played internationally for more than 20 years and achieved a world ranking of 22. During his illustrious career, he beat many players ranked in the top 10 in the world. He represented his country at International Events from 1992 until 2008, won the SA nationals 5 times, and holds 7 World Masters Championships (a record no one else has yet equaled!).

Craig is also a National referee and coach and has given many hours of training and facilitating many courses to better our South African players both on the court and in the rules of the game.  In recent years Craig has concentrated his attentions on the young talent within SA and has also received the SA Coach of the Year award.

Graham has been playing league squash since the 1980s to date where he plays in the Western Province Squash league. He has a rich history as an administrator from the time he was the Chairman at Bryanston Sports Club from 1985 till 1990. He has managed to be part of numerous club committees including chairing the Old Parktonian Squash Club (1991 -2000) and the VOB Squash Club (2014 to present).
As a testament to the great work Graham has committed to the Squash fraternity, he has been recognised as the club administrator in 2016 and 2018. In 2018, Graham was elected President of Western Province Squash and subsequently the safeguarding officer for Squash South Africa in 2020 as an Exco member.

Roshael has played league squash for Randburg Squash Club before moving to Chambers Exile Squash Club, where she was nominated Captain for the 3rd League Ladies Teams during her tenure at both clubs. At the Chambers Exile Squash Club, Roshael and a small team of 3 other ladies host an annual Fundraiser Fun Squash Tournament, with the Pink Drive as the tournament’s beneficiary. She and the team were awarded the Sportsperson of the Year Award for their ongoing efforts.

Roshael is passionate about conservation and has been the most recent Past President of the Hiking Association of Southern Africa, an NGO designed to govern hiking-related activities. She currently volunteers on the Board of the Endangered Wildlife Trust, as a Trustee where she adds to value to several subcommittees.

Roshael intends to contribute positively to the sport of squash, by serving on the Squash South Africa Executive Committee, in a strategic advisory capacity.

News From Our Partners

Tsogo Sun Hotels is offering all our members unbelievable rates across South Africa.
All Squash South Africa members who wish to book and capitalize on the Squash SA preferred rates will need to advise the hotel of choice that they are members of Squash SA, alternatively, they can copy Siya on their mails when making reservations. Contact Siyabonga.Phungula@tsogosun.com.

Dunlop SA has renewed its partnership with Squash SA as it continues to show its commitment towards growing the sport in SA.

Squash South Africa is proud to be associated with a proud and loyal brand as Dunlop and the future has never looked more exciting.

The federation encourages all our members to choose Dunlop as that, in turn, strengthens our association with our long-time partner. Show your support by means of posting any photos with your Dunlop squash products on our social media pages.