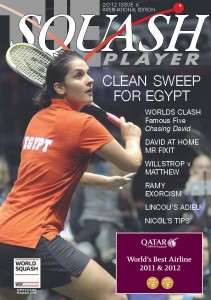 – Nick Matthew and James Willstrop going head to head,with Rod Gilmour asking the questions
– Nicol David explaining what her life is like in Amsterdam, while Ronald Fauvel talks about his job as her structural integrator
– Thierry Lincou looking back on his memorable career with Richard Eaton
– Ramy Ashour talking to Alan Thatcher about his return to top form and how he conquered his demons
– All you want to know in the build-up to the Men’s World Championship and Women’s World Open

– Gawain Briars making some points about scoring and tactics
– A review of Matthew Syed’s book ‘Bounce’
– Javier Reviriego Sanz sharing his course experiences
– James Willstrop’s book extract on his ‘day of death’
– A lesson from Ian McKenzie’s ‘The Squash Workshop’ scrutinising a key area in the game
– Peter Nicol advising you to learn from your mistakes and revealing the trauma behind his British Open jinx in his SquashSkills.com article

For magazine information and orders please go to: www.squashplayershop.co.uk