The varsity side have dominated the top division in Eastern Province squash in recent years, having won the men’s first league title five years in a row and the league crown from 2012 to 2015. 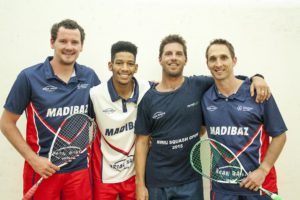 Last year, they conceded the league title to Londt Park and player-coach Jason le Roux said they were delighted to annex it for the fifth time this year.

Le Roux, who plays at number one for the team, said they had set themselves the goal of continuing the tradition of success NMMU squash had achieved in the last few years.

“We had two new players in the squad in Grant Greyling and Gershwin Forbes and we told them we were all under pressure to maintain our level of success,” he said.

“We did not want to fall into the trap of just thinking we were building for the future, so we created a culture of striving to win all our matches.”

Le Roux said the Madibaz always felt the league would come down to the final clash between themselves and Londt Park, but that did not make it “any less nerve-wracking”.

“There was a lot of tension going into the final match and it was very close, with the matches at numbers four and five both going to five games.”

In those encounters, Forbes held his nerve against the experienced Quintin Masters and NMMU’s Johan Thiel survived a strong fightback from Tyler Whitby to take a crucial victory.

After Brendan Bassett (NMMU) had beaten Graham Hall in the first match of the evening, Thiel’s triumph meant the varsity team had taken an unassailable lead in the best-of-five encounter.

“We were very keen to win it again and worked hard to prepare ourselves for the league,” said Le Roux. “Often we trained in smaller groups because of the times the players were available but we put in a lot of effort.”

The Madibaz coach said they would be looking to translate this winning culture into success at the annual University Sport South Africa (USSA) tournament.

“We have often ended up second or third at these tournaments, but this time we want to put in the effort to see if we can contend for the USSA title,” he said.

They will kick off their campaign to retain the first league title when the winter competition starts on April 18.

The women’s Super League side ended third in their competition.