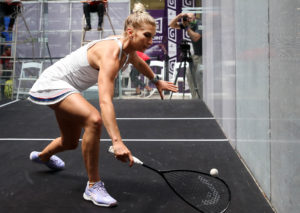 Alex Fuller during the quarter finals of the Growthpoint SA National Squash Championships at the Brooklyn Mall on October 15, 2020 in Pretoria, South Africa. (Photo by Reg Caldecott/Gallo Images) 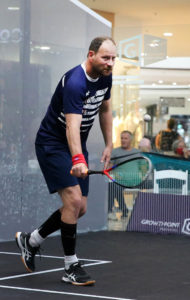 The Western Province star, who first played in the SA Nationals final in 1994 when he was runner-up, held off a terrific fightback from his 23-year-old opponent, edging home 11-9 in the fifth after 45 minutes. The 48-year-old Durbach, who was champion in 1999, 2003 and 2009, knows time his running out, but said he would love to make it four titles “because that is not a very big club”.

To do that he will have to dig deep again today when he faces second seed Christo Potgieter, who came through 3-0 in a tough encounter against SA Country Districts teammate Rudi van Niekerk, Dewald’s elder brother.

Durbach had treatment on a hamstring when he led 2-0, but he said although he had to change his tactics to an extent, the leg did not worsen during the remainder of the match. Van Niekerk must be given credit the resolve he showed and the result was in the balance right until the end. Eventually Durbach’s years of experience and ability to keep it tight in the big moments saw him edge into the last four.

Defending champion JP Brits shrugged off a slowish start to quell the exuberant shotmaking of KwaZulu-Natal’s Matthew Boote with a 3-1 win in the first men’s match of the day. The top seed let a 5-1 lead slip in the first game as Boote displayed his racket skills to snatch it 11-9, but Brits settled into his game and gradually wore his opponent down with his efficient play. At the end of 41 minutes he was safely through to the semifinals with a 9-11 11-7 11-6 11-5 win.

“Matthew was playing really well, but I just told myself to settle down and not to panic,” Brits said about losing the first game. “I focused on sticking to the basics and trying to keep the ball deep, and once you have a bit of consistency, it makes it a bit easier to win the points.”

He now faces Northerns player Ruan Olivier, who advanced with a comfortable 3-0 win over Mighael Lombard of Western Province.

Top women’s seed Alex Fuller sent an early warning to her rivals as she dismantled former champion Farrah Sterne in three games, reversing a loss she suffered against the Northerns player the last time they played. Admittedly that was eight years ago and the 42-year-old Sterne, who won the Nationals in 2008 and 2010, battled to manage the pace set by her 27-year-old Western Province rival today. Fuller admitted to a certain amount of nerves going into the game but will be feeling a little more comfortable going forward.

“The court is pretty fast-paced and I was a bit nervous about that, but I aimed at just trying to build a rally and to go for my shots when I had the chance,” she said. “This was a good start, but I will continue to take it one match at a time.”

South Africa’s leading professional will now take on Eastern Province’s Hayley Ward, who advanced after a thrilling shootout against Danell Douglas (SA Country Districts). They are two of the country’s leading varsity players and it was a ding-dong battle which Ward won 3-2 in 38 minutes. After taking time to find her rhythm, Ward marched into a 2-1 lead, but Douglas would not go away and levelled the match by winning the fourth 11-7. She then shot ahead 3-0, but Ward showed great determination and skill to haul herself back into the game and took a telling 10-7 lead, winning the match when she forced an error on her first match point.

Another burgeoning talent in Teagan Roux, who hails from Queenstown but is now studying at University of Johannesburg, struck a blow for the young guns when she eliminated experienced KwaZulu-Natalian Samantha Herbert in four games. The 19-year-old was full of energy against her 45-year-old opponent, although Herbert threatened a fightback and showed considerable skill and proper determination to keep the match alive by winning the third game. Roux, however, regained control in the fourth and won it comfortably to reach the semifinals and set up a showdown with second seed Lizelle Muller. Last year’s runner-up was made to work for her win over close friend Jacqui Ryder after losing the second game, but in the end Muller powered into the last four.