Pretoria, Tshwane.
It is no simple matter erecting a squash court in a shopping centre but the value of the exercise will again be underlined when the Growthpoint SA Nationals tournament takes place at the Brooklyn Mall in Pretoria from October 15 to 17.

Since Growthpoint Properties came on board with Squash SA in 2017, major events in the country have received a spectacular boost as tournament organisers seize the chance to showcase their events to the public.

Competing in shopping malls has generated massive exposure for the sport, taking it from outside the traditional club-type environment to varied locations, creating a chance for passing shoppers to witness the action.

Former Squash SA president and provincial player Steve Doeg has no doubt about what it has done to raise the profile of the game.

“The glass court has opened up a huge opportunity for squash to be exposed to the general public, as well as sponsors getting much wider exposure,” he said. “When you add live-streaming, the reach is incredible and this is the best thing that has happened to squash in many years.”

“In particular, when we have set it up in shopping malls we have received a great deal of comments as many people who walk past it have never seen a squash court before, let alone watch some of the top players in action.”

The next opportunity will come later this month, with champions JP Brits and Milnay Louw hoping to defend their titles at the Brooklyn Mall. But first they must negotiate the regional qualifiers which will be played in eight centres around the country from October 8 to 11.

The all-glass court has an impressive history, going back to 1992 when it was used for the first-ever men’s World Open brought to South Africa under the promotion of the late Owen Emslie.

Pakistani great Jansher Kahn was crowned champion that year when the court was erected at the Standard Bank Arena in Johannesburg and it was again in use the following year when Australian Michelle Martin won the women’s World Open at the same venue.

Since then it has been placed in a number of interesting locations, including Cape Town’s V & A Waterfront, the Bloemfontein Mall and the SuperSport cricket ground in Centurion.

The court is housed in a container and is moved from venue to venue, where it is erected in stages. The floor takes approximately one day to set up level and then the framework for the glass panels is erected.

There are 54 glass panels of various sizes and once these are in place, the light canopy is secured on the framework and the lights set up. The court is then ready for play.

In choosing the locations, Doeg said it was important that the sub-structure of the venue was sound.

“The area must be strong enough to take the weight of the court, as well as the players’ movement, so ideally you want a concrete surface,” he said.

“It takes about five days to set up, but this time we are building a completely new floor and installing a new lighting system, so this will probably add a further two days.”

Transporting the court is also a challenge.

“It weighs a massive 14 tons (12 700kg) when packed in the container, so this is the major effort, with a special crane truck used to move the container,” added Doeg. “It is a very specialised process and has to be done precisely in order to have the least amount of stress on the glass panels.”

After the court hadn’t been used for about a decade, Doeg recalled the issues they faced when they dusted it off for the 2018 SA Open.

“For a start, we didn’t realise the complications of moving it from Johannesburg, where it had been stored in a warehouse, to Pretoria, which ended up taking us a full day,” he said.

“Then, when we began setting up the next morning at 8 am, with the first match due on at about 3 pm, we discovered that the paint had completely dried and turned the floor into something equivalent to a skating rink.

“We tried all sorts of things to rectify the situation, including scraping it with baking powder, using Coca-Cola and finally sandpapering it by hand.

“This obviously took time and we had to move the opening matches to another venue. But once we had got it ready for use the floor was the normal wood colour and not painted black, so we could no longer use the special white ball adapted for the court and television, and had to revert to the standard black ball.”

The regular use since that time has resolved most of those problems.

“There are always a few challenges with outside light in different venues, but we are slowly overcoming all these issues,” said Doeg. “Each time the court is set up it gets better and the spectacle more awesome.”

South Africa’s top players have bought into the idea of competing in shopping locations.

“It’s a really great marketing occasion and exposure for the sport,” said Louw.

“Sometimes you need to adapt to the situation on the court with all the reflection and movement around it, but it is still a fantastic opportunity to play on it.”

Brits paid tribute to title sponsors Growthpoint, who owns many of the properties where the court is placed.

“It’s wonderful to have this amazing opportunity to host the tournament in malls like Brooklyn and the V & A Waterfront, taking it out of traditional squash centres where you only get about 100 spectators,” he said.

“As a professional player, there is no better place to showcase our sport than in a public arena and the past couple of years have been a great experience.

“The atmosphere is terrific and it’s good to see the squash community come together to support the event and also to have the general public seeing what’s happening inside this ‘glass box’.

“I would like to see this continue to attract more eyes to our wonderful sport and to grow support for the game.” 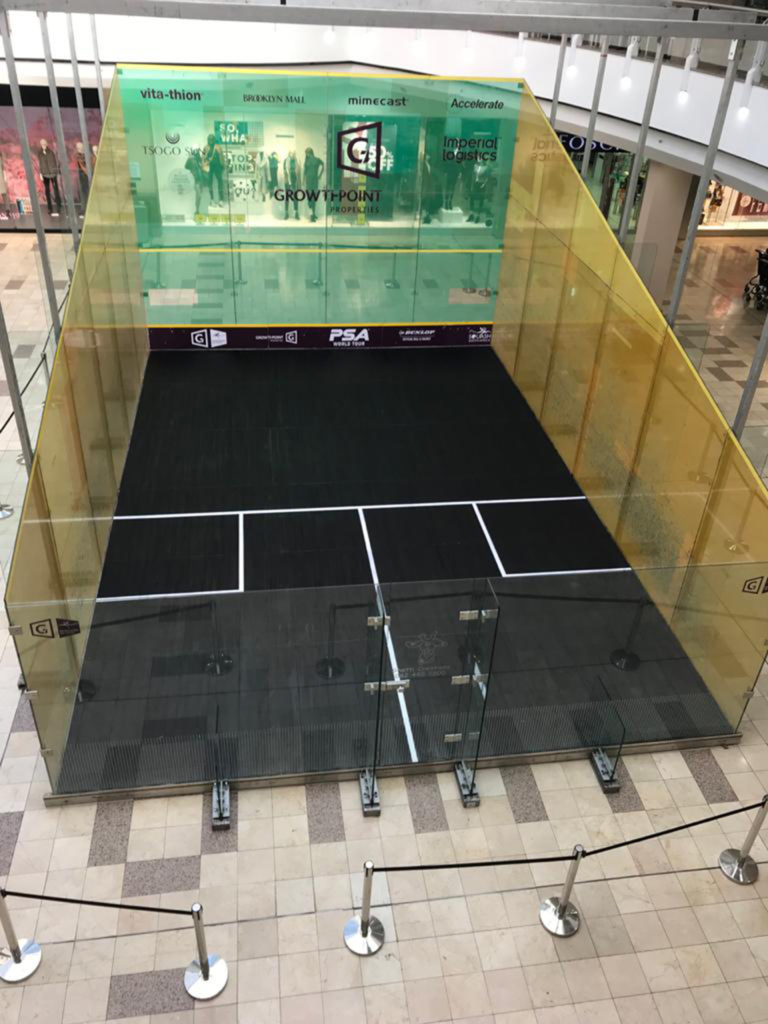 The all-glass court owned by Squash SA will be set up at the Brooklyn Mall in Pretoria to host the final rounds of the Growthpoint SA Nationals tournament from October 15 to 17. Picture: Supplied