The finals of the Balwin Assore Gauteng Open were well contested and had the crowd in awe.

First up were the ladies. For the first time during the tournament Rowan Elaraby was made to rally and work for her points. Elaraby kept to her game plan and kept the ball deep and tight. As soon  as Louw hit the ball short Elaraby was onto it quickly and either played a deadly drop or low hard cross court that just put Louw under too much pressure. Louw said, “Rowan was just more consistent than me and I made too many mistakes instead of waiting out the rally.”

Elaraby was thrilled to win her first PSA event and was happy with the her performance on the day. “The game was not easy and I felt it was very quick. I am very happy that I won and am looking forward to my next event in Cape Town,” said Elaraby.

The men’s final was a spectacular display of squash with the game see-sawing between the 2 players. After the first game Rehman looked very tired and the crowd seemed to think that it was going to sway towards Romiglio as he won the second fairly convincingly. Rehman was not going to lie down so easily and found some magic energy from within to once again put Romiglio under pressure and went 2-1 ahead. After a tight start to the fourth Romiglio hit some tight lengths and great nick shots to even the match at 2 each. If anyone had placed money on this match they would have been sitting on the edge of their seats right until the last point.

Both players had 5 match balls each with the advantage going backwards and forward. Both players played amazing shots to either even the score or to go match ball ahead. They also both made crucial mistakes at the last minute giving away the hard earned advantage. Eventually after a crowd pleasing performance Romiglio won the match 20-18. As everyone said it was sad that there had to be a winner and both players played the match with fantastic sportsmanship and professionalism expected of an international squash player. 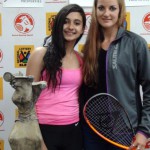 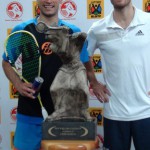